Learn Arabic: A guide leading you to learn Arabic 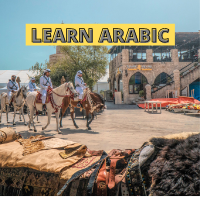 Arabic: A guide leading you to learn Arabic

Arabic is one of the most common languages spoken in the world. There are various advantages of learning Arabic, but let’s first look a little bit into the history of the language.

Arabic belongs to the Semitic, also known as the Syro-Arabian language family. It is believed that Arabic first emerged in the 1st to 4th centuries CE. Besides Arabic, the other common Semitic languages are Amharic, Tigrinya, Hebrew, Tigre, Aramaic, Maltese among others.

Before getting into the various and need I mention, amazing reasons to learn Arabic, and the different ways to do it, let’s quickly look at the advantages of being bilingual.

It stands true to this day. Let’s say you learn a foreign language and you are fortunate enough that you get to travel to that country soon. You wouldn’t have the problem of the language barrier. Local citizens adore the tourists who can speak their native language and hence your travel will be much more enjoyable and easier than you will have hoped.

Learning a foreign language adds one more feather to the ‘personal development’ hat. It allows you to grasp multiple complex things at once which is a plus point in academics when you are specifically required to multitask. Studies have also shown that some other advantages of bilingual education are improved memory, cognitive development, better achievements, and the like.

When you learn a foreign language, it expands the fields of jobs that you can apply for. An academician, or a personal tutor perhaps. But if you want a job in the corporate world itself, you can become a translator for multinational corporations. It has great pay and high respect. You can further broaden your chances in the career fields as and when you learn more languages. Knowing just one language restricts you in various aspects of your life while learning a foreign language or more can break those barriers and help you reach greater heights.

Let’s now get into the fun and best reasons to learn Arabic.

I’m sure you were already familiar with these reasons. But do you know the different ways of learning Arabic? Let me help you with that.

Language Fluent is an online institution that teaches you more than 10 foreign languages. You can start learning Arabic from scratch or from the level you desire based on your prior knowledge of the language. We have trained professionals guiding you throughout your journey of learning this amazing language.

Duolingo is an app that teaches foreign languages. Here too, you can start at any level based on your prior knowledge of Arabic.

“Arabic verbs and essentials of grammar”

5. Podcasts: Podcasts have become the new favorite thing for people who want to learn foreign languages. Here are a few of the podcasts that will help you learn Arabic.Arabicpod101

The Arabic language is a window to an amazing and intriguing culture and history.

Which foreign language you should learn?