Learning a language might just be your best gift to yourself – Here’s why: 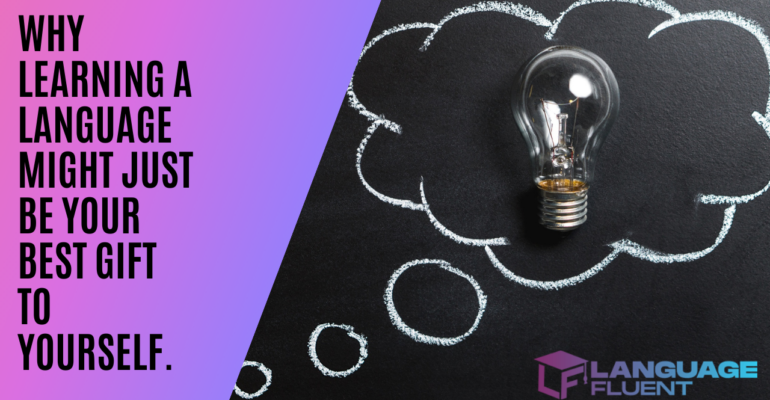 “Learning another language is the equivalent of becoming another person.”

The wisdom of these great words by Haruki Murakami should probably tell you all about why you must learn a foreign language. Still, have doubts? Well, what if I tell you that you can have better pay, better educational opportunities, richer social life, and literally, a bigger, healthier, and faster brain? I’m certain I have your attention now.

So, how can you achieve all the aforementioned points? Spending bucket loads of money? No. Take a quick trip to Hogwarts and take a magic potion? While that would be fantastic, it’s certainly not possible (or is it?).

Why it’s as easy as learning a foreign language. But wouldn’t learning a language take too much time and commitment? Isn’t it much tougher for adults to learn a new language? Why learn a language when one has all the translation apps right on his/her phone?  Strap in, ladies and gentlemen, while I change your perception towards learning a language. And for those readers who are already learning one, read on to know all the benefits you’ve been reaping.

There are so many benefits of learning a foreign language, that it sells itself. If I may be too bold, I’d say that if you’re not already learning a language, you’re already late. But hey, better late than never!

GIVE YOURSELF A MAKEOVER

Learning a language is a hidden power like the moon controls the tides of the sea. Behind the rules and construct of the grammar of a language is a reflection of the rich history, an insight into the extravagant culture, and the thinking and personality of the native people speaking that language.

So it is safe to assume that if you know different languages, you can feel right at home anywhere in the world. Be it Elizabeth from ‘Eat, Pray, Love’ or Lt. John Dunbar from ‘Dances With Wolves’, learning a language has always been shown as a factor leading to a character’s growth. In my humble opinion, learning a language is the best way to instill confidence in yourself.

Trust me, once you’ve spoken your first sentence in the language you’re learning, the only thought you’ll have is why didn’t you do it sooner.

WHAT IF WANDERLUST ISNT JUST A WORD BUT AN EMOTION FOR YOU?

Knowing a language helps you get a sense of adventure and significantly improves your traveling experience by letting you have a more authentic dining experience, getting cheaper and better lodging and learning the tips and tricks of daily life in the country where you plan your visit, making you a citizen of the world.

Not to mention, native people respect you much more when you speak to them in the language they speak. Taxi drivers, waiters, travel guides, or that cute person you saw at the coffee shop during your travel, you name it.

Well, learning a language just might be the miracle you need to become an all-rounder. Studies have shown that Multilingual not only have better memory and cognitive performance but also possess increased self-control and focus. For those people who want to have a stronger foothold in the dating field, knowing a foreign language not only makes you more attractive but also expands your pool for potential friends and dating partners.

With thousands of people applying for single positions, getting a job has been tougher than ever. No, adding ‘proficient in MS Office’ won’t cut it for you, but knowing a foreign language just might. Statistics show that people who know a foreign language have 6.6% more chances of landing a job.

This old Jewish proverb must tell you about the importance of health and wellness. A man’s health is judged by what he takes two at a time- pills or stairs.

What if I were to tell you that learning a language can help you achieve mental as well as physical wellbeing? Learning a language can reduce the risk of diseases such as Dementia, Alzheimer’s, and memory loss. While monolinguals usually start developing Alzheimer’s at the age of 71, Bilinguals don’t start developing the signs as late as the age of 76!

But what if you’re just a middle-aged person, trying to be better at his/her job? Well, I’ll make sure that you didn’t waste your time reading this. Learning a language can boost up your annual salary by anywhere between 2% to 15%. With the world coming as close as peas in a pod, every organization, whether small scale or large scale, is going global.

But English is the language of the world, isn’t it? Then why should I learn a new language when everyone in the corporate world speaks English? Well, I’ll answer your question with a proverb from Nelson Mandela:

Communicating with clients and companies directly in their native language is a sure shot way to form a stable, long-lasting business relationship with them. Your ability to do this is why your boss will choose you over that employee you hate and will end up sending a big bonus check your way. All this untapped potential can be unlocked just by learning a foreign language.

According to the Census of India, out of the massive 1.33 billion people living in the country, only 314.9 million people know a second language, forget knowing the third one. So just by learning a language, you can get ahead of almost a billion people. Just imagine! With everything being a click away, you can find resources that will help you learn a language online for free but are those online resources all that is required to learn a language and get fluent in one? Let me put it this way, the difference between learning a language professionally and solely focusing on online learning is the exact same difference between just knowing the words and speaking a language with confidence.

It will take commitment and dedication, but hey, nothing perfect ever came easy, did it?! So, if you’re still not convinced, learn a language because it’s a life-changing experience. In the long run, it’s one of the best things you can do for your brain, your social life and could lead to new and gorgeous adventures. But I know you are already eager to learn a language, aren’t you? Well, what better way is there to learn a language than to learn from the best in the field?

We told you all about the ‘why’, now let us handle the ‘how’. Head on to Languagefluent or drop an email at the address below to know about intensive, well-structured language courses and begin a new phase in your life, today!       enquire@test.kaleemullah.live +91-832 968 3501