Why you should really learn Japanese right now 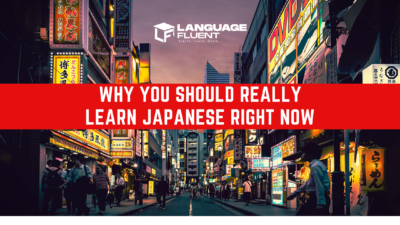 Why should you learn Japanese?

For a long time, I have been asked this question by multiple people. Why should I learn Japanese, what are the benefits of learning Japanese. So here are some of the reasons why you should really learn Japanese right now.

Over the last few decades, Japan has firmly established its culture across the world. Within the last few years though, Japanese culture has gotten more and more mainstream with more and more Otakus and Weebs joining the forces every day.

Anime has come a long from being referred to as just a cartoon to be considered revolutionary and game-changing especially due to its 100 billion dollar industry. With Manga and Light Novels also receiving worldwide recognition.

The Japanese cultural phenomenon is not going away anywhere anytime soon. Japan also has some of the most famous temples and locations to visit as a tourist, and they really appreciate people who speak their language.

There is an abundance of things to do with a variety of entertainment, arts, music, shopping, sports, traditional crafts as well as modern technology.

There’s a market to cater to almost anyone depending on where you go. From Maid Cafes where you get pampered by cute maids in a French maid costume to you spending the entire afternoon with a bunch of furry friends at a cat cafe where you can go and spend time with cats and buy them some food along the way.

Japan is also the leader in many sectors like automobiles, animation, consumer electronics, computers, optical media, semiconductor manufacturing, infrastructure, shipbuilding, and many more.

The “made in Japan” is synonymous with high quality and technologically advanced prominent Japanese brands such as Sony, Honda, Panasonic, Hitachi, Toshiba, Sanyo, Casio, Canon, Minolta, Pioneer, Nikon, Fujitsu, Suzuki, Toyota, Mitsubishi, and hundreds of more have infiltrated the Indian market in a wide range of sectors and still expanding.

Being able to communicate with potential clients, customers, and colleagues can open many doors. The ability to speak the Japanese language in India offers many jobs that require languages.

Making Japanese not only one of the most sought after languages in India but also ranked as one of the highest paying foreign language jobs. So if Japan was a human, it would be the weird, super traditional, super-rich, super fun, super smart, super humble, super helpful, friend, you might have.

Language Fluent provides Japanese Language training, do check them out from the Courses Section.