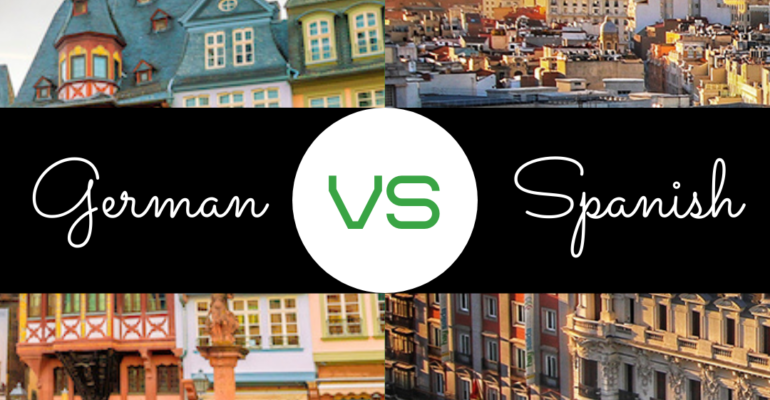 But that wasn’t why you opened up this article, did you? Your main dilemma is what language to learn. So sit tight and read the experts’ opinion on of the hottest questions people have while learning a language: German Vs Spanish. Both the languages aren’t that difficult to learn for English speakers, are pluricentric, provide an ocean of academic and job opportunities, etc. Having either language as a skill set doesn’t only give you an edge over your competition but also boosts your memory power and concentration. Not only this, both German and Spanish have a very rich cultural background as well.

Surely, there are a lot of questions that might arise in your mind, and with both languages being so very awesome. Provided below are 5 different areas where we will make German compete with Spanish and check which language appears as the winner.

1. Number of speakers in the world

Spanish is spoken by almost 500 million people. It is a language that is spoken in 44 countries and it is the official language of 22 countries, including some of the world’s most influential countries like America and Spain. Spanish is the most spoken language after English and Mandarin.

On the other hand, while German is the official language of the European Union, it is nowhere as widely spoken as Spanish. German has about 220 million speakers in the world, which is less than half of Spanish speakers. So it is safe to assume that Learning Spanish makes you familiar with more countries, thus making you a citizen of the world in a better way. So in this bout of German Vs. Spanish, Spanish wins.

German wins this by a yard. Since German isn’t as easy as Spanish, it makes you think, ultimately making you smarter. Not only this, Germany has some of the best universities for graduate and undergraduate courses in the world. German even works for the other top-notch universities anywhere in the European Union including countries like Austria, Switzerland, etc. While the use of Spanish in educational opportunities is continuously on a rise, it is nowhere near the presence German has in the educational spectra. So in this bout of German Vs. Spanish, German wins.

Spanish is the language to learn if you want to work anywhere in the US as it is the second most spoken language in America after English. If your work is related to meeting with local customers, you must learn the language they speak. Hence, learning Spanish will surely help you a lot. A lot of organizations are opening up their centers in Latin America, hence having Spanish on your resume will make you stand out from the rest of your competition.

If your work has anything to do with the internet, then German will give you the best bang for your buck. Its domain .de is the most widely used domain after .com. German has an extremely dominant position on the internet. Not only this, if your career is in the field of natural sciences and engineering, the most important foreign language that you must learn is German. Hence, in this bout of German Vs. Spanish,  there is no clear winner here. This criterion solely depends on where your career interests lie.

Here we will be taking into consideration three important criteria: Vocabulary, pronunciation, and learning period.

Both Spanish and German originate from the same roots as that of English. Hence a lot of the vocabulary is similar. Building your Spanish work bank won’t be difficult as with slight differences, you can easily build up a good Spanish vocabulary. However, in German, almost 60% of the vocabulary is shared with English. Also, the verb conjugation in German doesn’t have a lot of cases unlike Spanish, which makes it easier to remember. So in this bout of German Vs. Spanish,  German wins.

If you’re looking at the official language learning hours, learning German takes about 750 hours for the entire process. On the other hand, learning Spanish takes about 650 hours, which is 100 hours less than that of German. So if your goal is to learn a language up to the intermediate level, Spanish is the better choice for you. So in this bout of German Vs. Spanish, Spanish wins.

Agreed, Spanish is the easier language to learn out of the two. German has endless verb conjugations, numerous preposition cases, verb cases, etc. Learning German grammar is no walk in the park. But like the famous quote goes, “Nothing really good ever came easy.”

It is the scope of both languages that makes all the difference. While Spanish is spoken in a whole lot more countries, the combined economy of all these countries is nowhere near to the combined economy of German-speaking countries. Learning German provides excellent opportunities and opens a lot of doors for a student as German universities are some of the best universities out there ( Plus, free education!).  So in this bout of German Vs. Spanish, German wins.

So now that you have a detailed overview of each aspect of Spanish and German, you can know the pros and cons of each language and decide which language suits your needs better. After all, to each his own! To sum up, if you’re looking for work in the US and are looking for an easy language to learn in less time, Spanish is the one for you. But if you like a challenge and want a language that sharpens your brain and provides you opportunities throughout the European Union, then German is the language you should go for.

For more benefits of Spanish, check out the article here.

Click here to know, how to master the German language in a short span of time.

Whatever language it is that you want to pursue, Language Fluent has got you covered. Our highly qualified language instructors provide impeccable courses in both German and Spanish ( and a whole lot of other languages! ). Visit our head offices in Nagpur or check out our website here!