Lingo Kids – An amazing one of its kind Language Program! 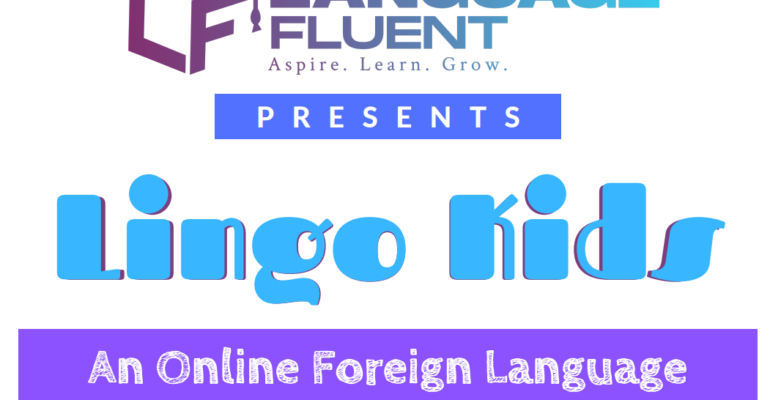 Hey, you. Yes, you. Do you have a child between the ages of 6-14 years? If the answer is yes, then reading this article will probably be the best thing you’ll do for your little kid today!

Kids might go to a particular camp to learn some relevant skills, but did you know that the experience can be much more to a child than just learning rudimentary skills? According to the American camp association, attending a particular camp not only helps a child to nurture his/her social skills but also helps him/her build up his/her confidence, make new friends and encourage personal growth.

“Okay. So this is probably just another article about some fun activities summer camp.”, is what you might be thinking. But, what if I were to tell you that your child can learn a language while attending the camp? Sounds unheard of, right? Well, that’s because it is. Language Fluent brings you one of its kind Foreign language camp – ‘Lingo Kids’!

Hold on. That feels like too much information in a single sentence, right? Well, let’s start by introducing ourselves.

What is Language Fluent?

Language Fluent is an institute that specializes in providing professional training in foreign languages. We offer systematic and well-structured courses at great affordable prices. We guide our students right from the very basics and roots of a foreign language and take them to the highest level available, holding their hands every step of the way.

Why should children be learning a Foreign language right now

“But my child is just a pre-teen. Are you sure if it’s the right time for him to learn an entire language when he/she is already learning English?” Well, I’ll answer this by telling you some of the benefits your child will be availing of by learning another foreign language. The benefits are so good, that you’ll practically be running to get your child enrolled by the end of this article.

An expanded view of the world

Learning a language helps a child to see the culture speaking that particular language in a completely new light. This not only builds a child’s empathy and cultural sensibility but also equips one with the aids in understanding the world in completely new ways, which is an adventure of its own.

Learning a language has been scientifically proven to not only boost a child’s memory and cognitive abilities, but also one’s creative and listening abilities. Moreover, bilingual students score as much as 140 points higher than monolingual students on the SAT scores!

A person’s health is judged by what he takes two at a time- pills or stairs. Learning a foreign language helps you being physically and mentally fit by reducing the risk of diseases such as Dementia, Alzheimer’s, and memory loss. While monolinguals usually start developing Alzheimer’s at the age of 71, Bilinguals don’t start developing the signs as late as the age of 76! So, gifting your child the ability to be bilingual will also contribute to him/her living a healthy life.

Get ahead of the curve

It’s simple facts when I tell you that the world today has got a cut-throat level of competition. Parents are enrolling their children in as many programs as possible which might not even be of the child’s interest and might kill his/her ambitions. A good example of this would be every child getting enrolled to learn coding, which might not give the child any options to discover any other fields other than Computer sciences and might ruin their curiosity.

Our language camp ‘Lingo Kids’ will not only not do anything of such kind, but a foreign language is the hottest thing one can have on their resumes nowadays. In fact, people who know a foreign language have 6.6% more chances of landing whatever job they opt for! In fact, it’ll open up a child to all the different fields of work in the world by broadening a child’s perspective and field of vision.

I’m sure you’re sold on the idea by now and can’t wait for your child to learn a new language. So let me present to you, India’s one of a kind language camp – ‘LINGO KIDS’

What is Lingo kids?

Breaking it down to the basics, Lingo kids is an online foreign language learning program offered by Language Fluent specially structured for kids between the ages of 6 years to 14 years. The Classes are taught by qualified professional language instructors who undergo specific pedagogical training to make sure that the children have the time of their lives and learn a language in a fun way and not feel it to be a burden at all.

We’re well aware of the increasing competition nowadays. Keeping that in mind, we’ve chosen 4 foreign languages that will not only help your child in improving his/her cognitive and social skills but also help him/her in the future, no matter whatever field of work your talented ward chooses to go into!

These are the 4 languages offered in Lingo Kids:

If you’re looking to settle in the United States or even get your higher education from there, learning Spanish is a no brainer. With over 53 million Spanish speakers in the country, having Spanish as a foreign language will really let your college resume be the clear choice over all others on that pile of resumes kept in the Ivy League Universities.

This one is a clear choice for Lingo Kids. German is not only the most widely spoken language in the European Union but also the most important language to learn after English in the field of Natural sciences. Not only is it easier to learn, but it will also show Europe to your child in an entirely new light. He/she will be able to travel anywhere and understand everything, taking his/her confidence to unimaginable heights and making him/her a citizen of the world.

If you feel that your child needs to have a more tenuous grasp of English first before moving on to other languages, we’ve got you covered. English is the language of the world. Not only is it the official language of 67 countries, but is spoken in every nook and cranny of the world. Good command over the English language will instill confidence in your child and help him/her ace every interview he/she ever gives!

What’s unique in an already one of kind Language program?

So what are you waiting for? Register now and join us for an amazing language learning experience and let your child take a brave, endearing step in his/her life today!